Eyes of Doom is a British-based version of the template set so firmly in many a horror fan’s brain by Stephen King’s IT. That doesn’t mean it follows the exact same format, it’s just that with IT so fresh in the mind following the recent movie adaptation, and the fact that it’s one of my favourite King novels, it’s hard not to draw comparisons.

And in a way, that put me off this book as it went on, maybe unfairly so. Raymond Little has put together a novel that cares deeply about the characters, only it’s often at the expense of mood and scares. The frights do turn up, but the individual segments around each character take centre stage, and for a long time that’s all you get, which waters down the horror significantly. The first 5th of the book is mainly set-up, and it feels like it’s spinning its wheels for a while before the inevitable flashbacks occur, taking us from modern day to the seventies, back to the sixties, then forward into the eighties and beyond. 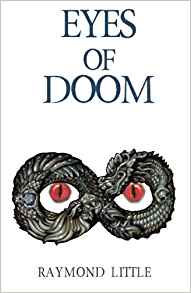 It’s in the sixties where the kids of the story meet Frankie, a rich kid who seems to be hiding something. In a town called Doom, it’s not going to be a bag of puppies and ice creams. This is a town gone bad thanks to the existence of a malignant gang of demons. Like Derry, that evil keeps returning. We visit various time periods with the kids, following them through adulthood, learning more about them and the main threat, personified as a mad doctor the kids call Bald Eagle.

My main issue with Eyes of Doom is that it hops around time periods in an odd way. You get a glimpse of the past before you’re steadily brought back to the present, which means a lot of people meeting & talking as the years go by. The horror comes from the ever-present evil, instead of returning every 20-odd years like in IT, tying itself to major historical and world events, but the main horror is reserved for the final few chapters. Until then, we flit from idea to to idea, with Bald Eagle popping up to quip, threaten and injure our heroes like a waking Freddy Krueger. Alongside this we get glimpses into the nation’s mood surrounding the miners strikes, AIDS, 9/11, acid raves and so on.

Touching on real history through the ages added authenticity, but I’d have liked to see a more imagined history of the town and the troubles of the growing kids. Relying on real life events to frame segments is a bit jarring, and as the book goes on, each passing mention of politics or the world stage brings you out of the fantasy, and they almost seem dropped in through obligation rather than purpose by the end. Bald Eagle loves misery, so it makes sense to mention those events as if he’s involved, but you’re left to reach that conclusion yourself, which robbed the story of what could have been a huge threat.

There’s a kind of hopelessness here that feeds through the book, the idea that evil persists no matter what you do, and that wore me down after a while. Each set of chapters in each time period shows you a person affected by the horrors of life with no real resolution, and halfway through, the characters are still no closer to banding together. When neither the good guys or the bad guys seem like they’re in control, who are we meant to worry about? Even Bald Eagle is described as impotent without a physical form at one point late in the story, which didn’t exactly gear me up for the final few chapters. By the time the final showdown happens, I didn’t really feel for either side, and while the ending offers a glimmer of hope, it’s not the emotional “hi-yo silver, away!” it could have been.

And here’s where I couldn’t help but compare the book to IT again. The kids in IT got their shit pushed in, then got their shit together, many times, and you felt like you wanted to follow their fight. Everything was against them, they were scrappy fighters. Pennywise was constantly pushing back at them, and while you might have thought “they survived as kids, so they must survive as adults too” thanks to the flashbacks, you were never sure who would make it. Eyes of Doom has a lot of the same “what is wrong with this town?” dread and the kids/adults have a growing need for answers, but I found it hard to get enthusiastic about the fates of any of the …Doom crew, good or bad. All they seem to do is meet up and discuss problems. The book succeeds more as a character study than as a horror book, so while it’s not a bad read, those looking for chills will find slim pickings until the pacy ending pulls everything together a bit too quickly.

So while I won’t be recommending Eyes of Doom, I do invite you to make your own mind up, and you can do so by visiting Blood Bound Books right here. Thanks again to the good folk at BBB for the review copy.